A parent’s worst nightmare turned into a happy celebration earlier this month when nine year old, Alexis Edall, rescued a toddler who fell into the pool.

Alexis’ mother is extremely proud of her daughter who was quick to act, demonstrating the life-saving skills she had recently learned in a YMCA spring break aquatic seal camp.

“Alexis was paddling on a floaty in the deep end when she noticed a three-year-old girl reach for the pink flamingo floaty near Alexis, which caused her to step off the ledge and into the pool,” explains Alexis’ mom, Koby Edall. “The toddler was straight up and down when she stepped into the water and began to sink. Alexis dove off of her floaty, swam down to the little girl, pulled her up and swam her to the side of the pool. We are just so proud of our daughter.”

The lifesaving and water safety skills Alexis learned at the YMCA of Okanagan empowered her to act immediately and rescue the young child. 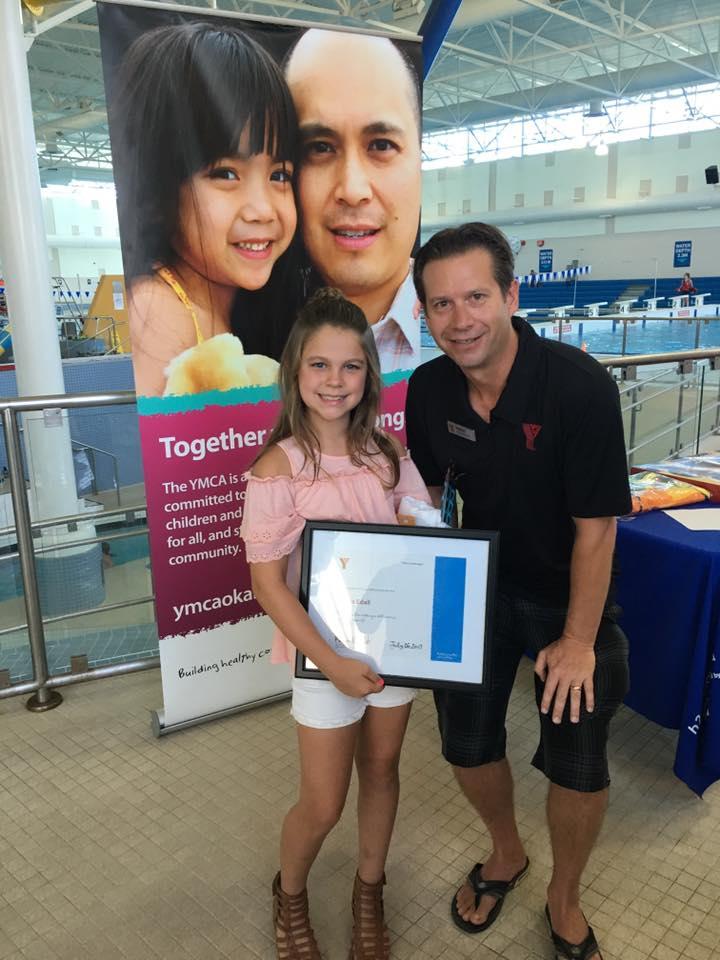 Everyone at the backyard pool party had taken the necessary precautions. Children were wearing Personal Floating Devices (PFD’s) and there were adults in the pool to play with and supervise the kids. The toddler’s PFD was removed for a brief moment after exiting the pool.

Alexis’ immediate reaction can be accredited to a combination of instinct and training. The spring break aquatic camp Alexis took included a lifeguarding component from the Lifesaving Society and she had also recently taken the YMCA’s Okanagan Swims program — a program funded by the Across the Lake Swim Society, which teaches critical water safety skills to every third and fourth grader in School District #23.

According to the 2016 Canadian Drowning Report there have been fewer water-related deaths in Canada over the past two decades. Unfortunately, the Thompson/Okanagan has seen its fair share of recent incidents over the last eight years with 46 reported drownings.

“At the YMCA, we believe that all kids in the area must learn crucial water safety skills for recreational use in our beautiful lakes, rivers, and backyard pools regardless of income,” urges Wight. “We are truly dedicated as an organization to drown proofing the Okanagan.”

Including swim lessons in membership and providing a variety of water safety and life-saving skills programs are just some of the ways the YMCA is working to keep people safe in and around water.